After a five hour ascent, the team finally reached the SAC hut. Ice picks and crampons fall to the snow. Gloved hands come together in a chorus of high-fives. The team has overcome the first challenge of the Confinale team event. Forty exhausted Confinale employees are now looking forward to an evening together in the warm Tierberglihütte at 2795 metres above sea level.

“It’s definitely unusual, particularly because this is our summer event!” concedes Roland Staub. The CEO was one of the group who fought their way up the steep climb between the crevasses on the Stein Glacier to the south of the Susten Pass. Under the guidance of professional mountain guides, every member of the six to eight strong rope teams had to rely on each other, as “nobody wanted to end up in a crevasse,” said Consultant Thomas Gaumnitz. “Even though the view was a bit foggy, it was a wonderful experience and we enjoyed some wonderful fresh snow,” About two thirds of the way through their climb, the rope teams broke through the clouds and could see the surrounding peaks shining in the sun. “Everybody needed a hand now and then,” grinned Michael Wolski. The software developer only joined Confinale last month, but has already noticed the strong team spirit: “We were all at the end of our abilities, but it didn’t take long before we settled into a tempo that was good for everyone.” 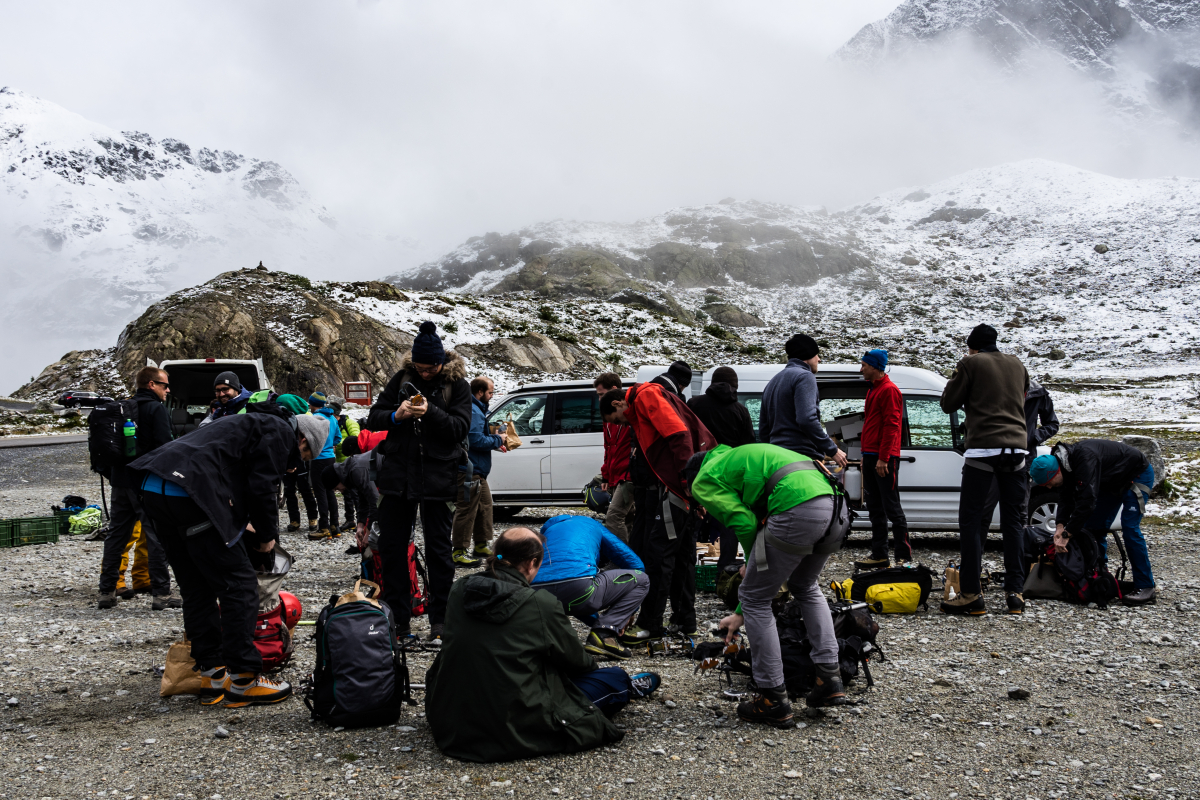 Getting ready to climb the glacier

A steep path up the glacier 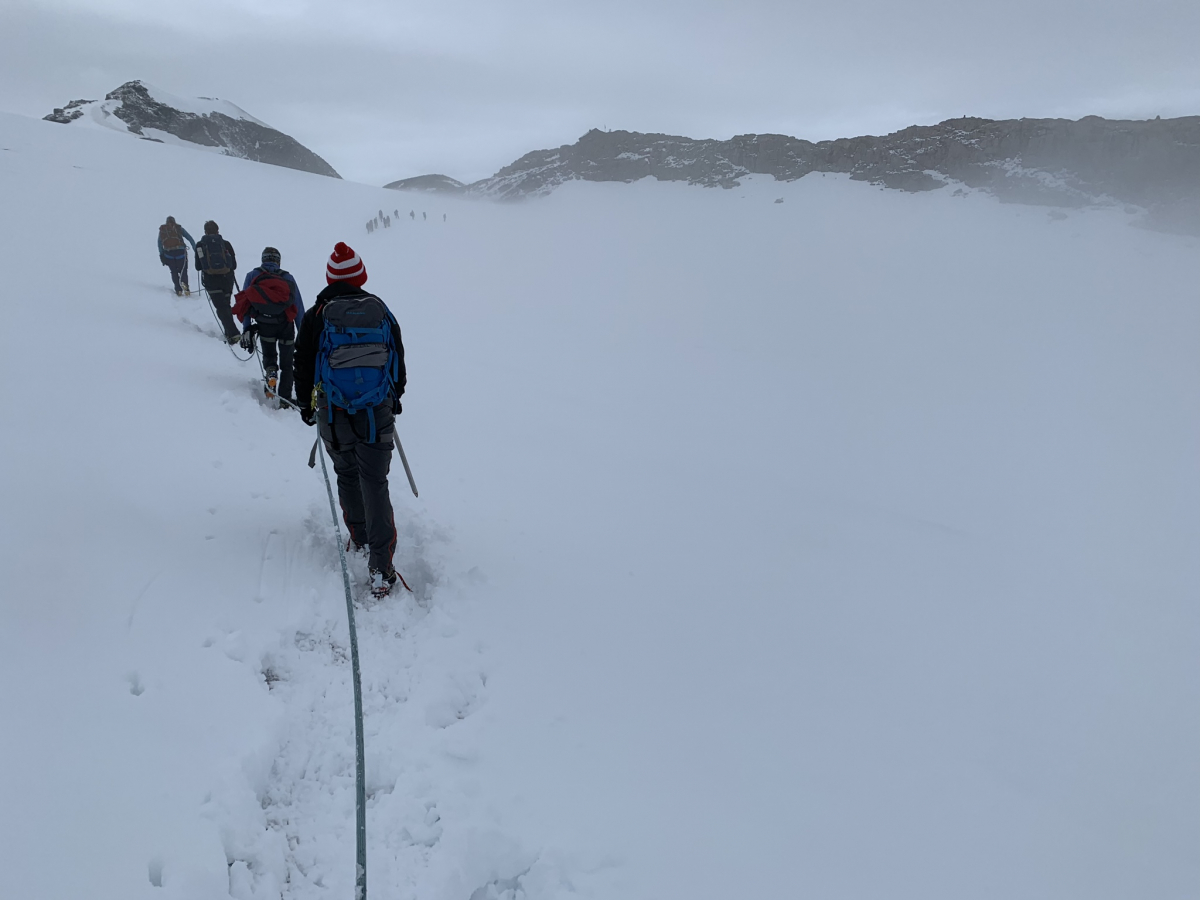 The final stage before reaching the Tierberglihütte

Later in the evening, after everyone had eaten their fill, we asked Senior Consultant Yasin Özdemir how he was finding it. “The weather wasn’t the best, but we all had a lot of fun. That makes it pretty obvious that people need events like this and really want to get involved.” As the temperature outside plummeted and the snow began to fall, the atmosphere inside the hut only improved. People seemed to forget that the steep descent into the valley was ahead of them early the next morning.

Everybody set off after a quick breakfast. The team gathered their equipment together largely in silence. The Alpine trail wound its way down into the valley through a 15 centimetres layer of fresh snow. The mountain guides used ropes at particularly steep points of the descent. Colleagues helped each other, waited for each other, asked for support and offered it to others. The fog cleared up as a light drizzle set in, revealing the valley below. “Steep enough for you?” panted Thomas Gaumnitz.

The descent on the next day

Everybody made it safe and sound down to the Susten Pass. After a peaceful bus trip to Interlaken (which most of the group used to catch up on sleep), the team had a hearty lunch at the tour guide’s favourite Italian restaurant.

The squad continued to the spectacular Lauterbrunnen Valley in the afternoon, where Tolkien found his inspiration for the landscapes in The Lord of the Rings. Base jumpers and waterfalls cast themselves down from practically vertical rock faces. A helicopter made its way down into the valley. The next item on the agenda had landed. The Confinale teams took off for a sightseeing flight in groups of five. Due to the weather, they “only” managed to take in Lake Thun and the Lauberhorn. The north face of the Eiger would have to wait for another day. After this experience, the bus tour continued to the Iseltwald Peninsula on Lake Brienz, where some employees were brave enough to take a refreshing dip. After checking into their rooms at the hostel and a sumptuous grilled meal, the group spent the evening over games and drinks in the common room.

Coming in to land 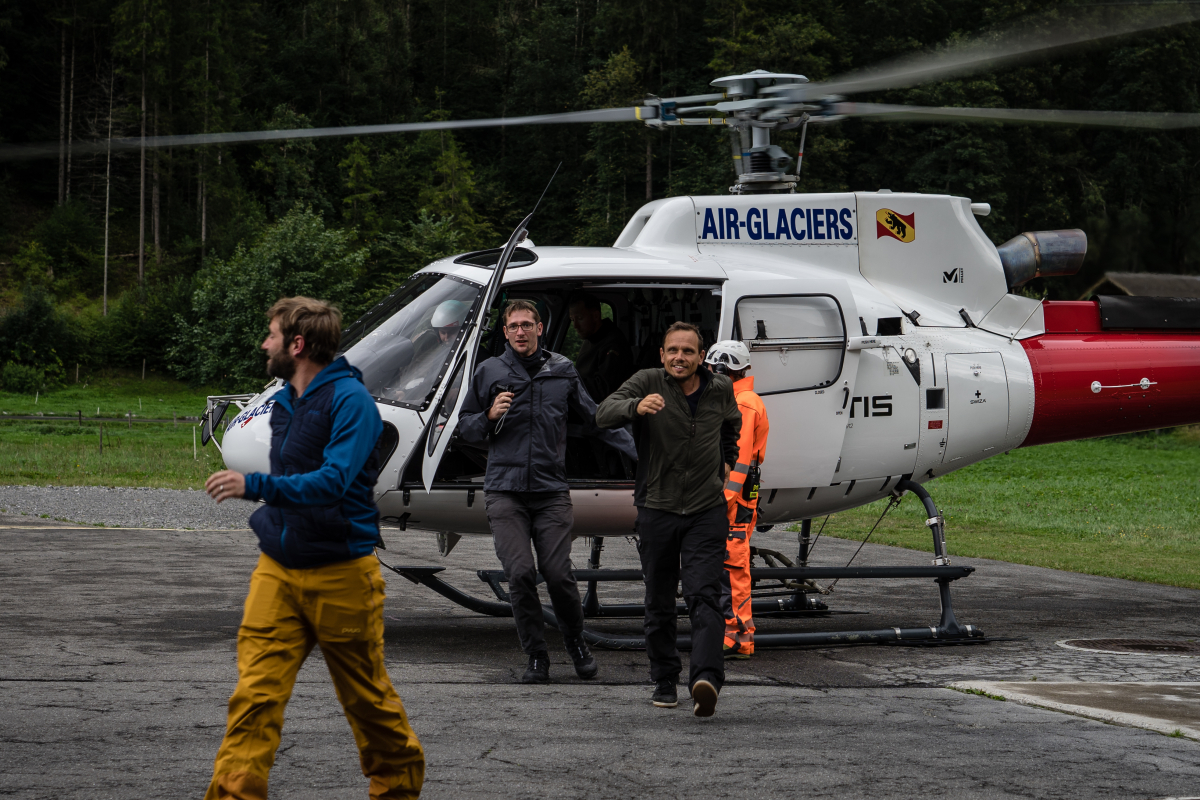 Happy to be back on the ground 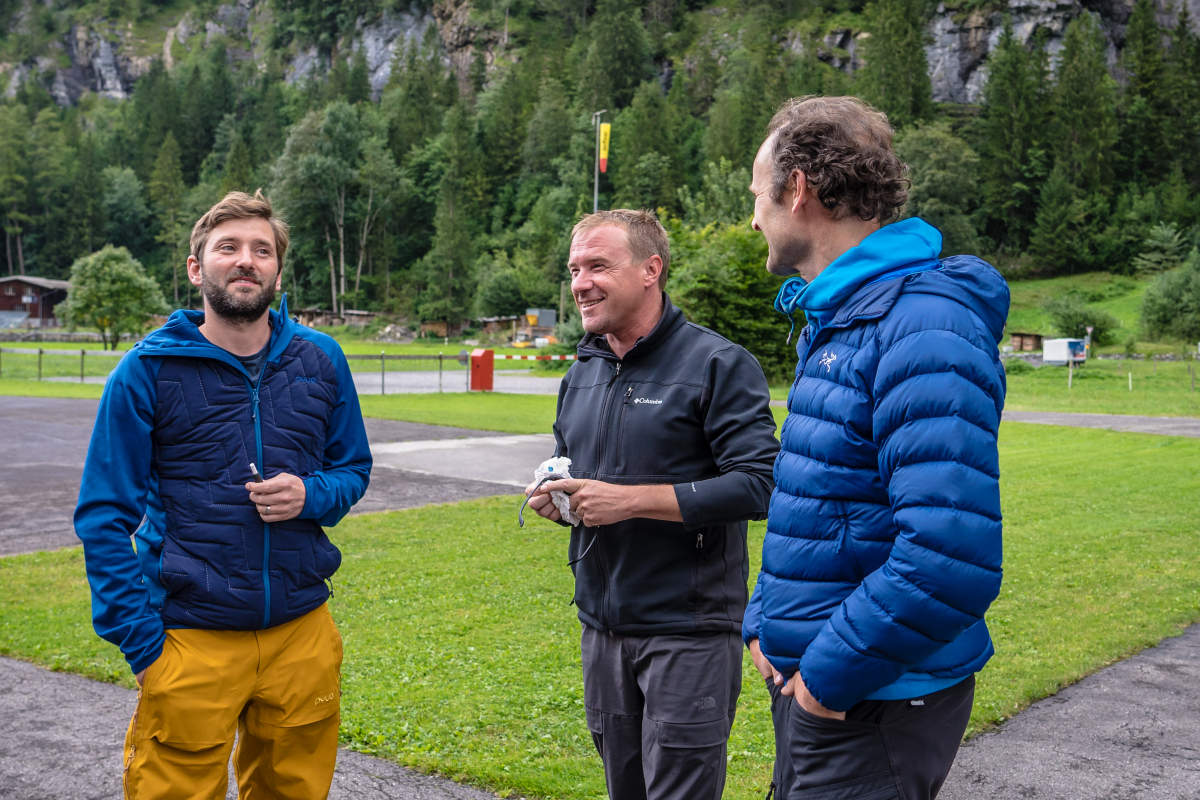 “Lütschine or Simme?” is the question on everybody’s lips the next morning. The two whitewater rivers offer two very different river rafting experiences. The powerful Lütschine river offers wild rapids. The moderate Simme river winds its way through an idyllic landscape. Despite heavy rain, a slight chill and some dissenting comments, the majority vote for the more action-packed experience. The group set off with neoprene suits and paddles in hand. Due to the low water level, the boulders stuck a long way out of the water. The crews had their hands full staying on course. “Let’s practice our rescues so that we don’t get too hot,” announced the guide.  The cry goes up: “Man overboard!”. Each time, a new colleague gets to be “rescued” out of the 6 C° river. Races, splashing and kidnapping attempts caused a lot of laughter and banter between the boats. All professional hierarchies were forgotten, with everybody paddling for and against everybody else. 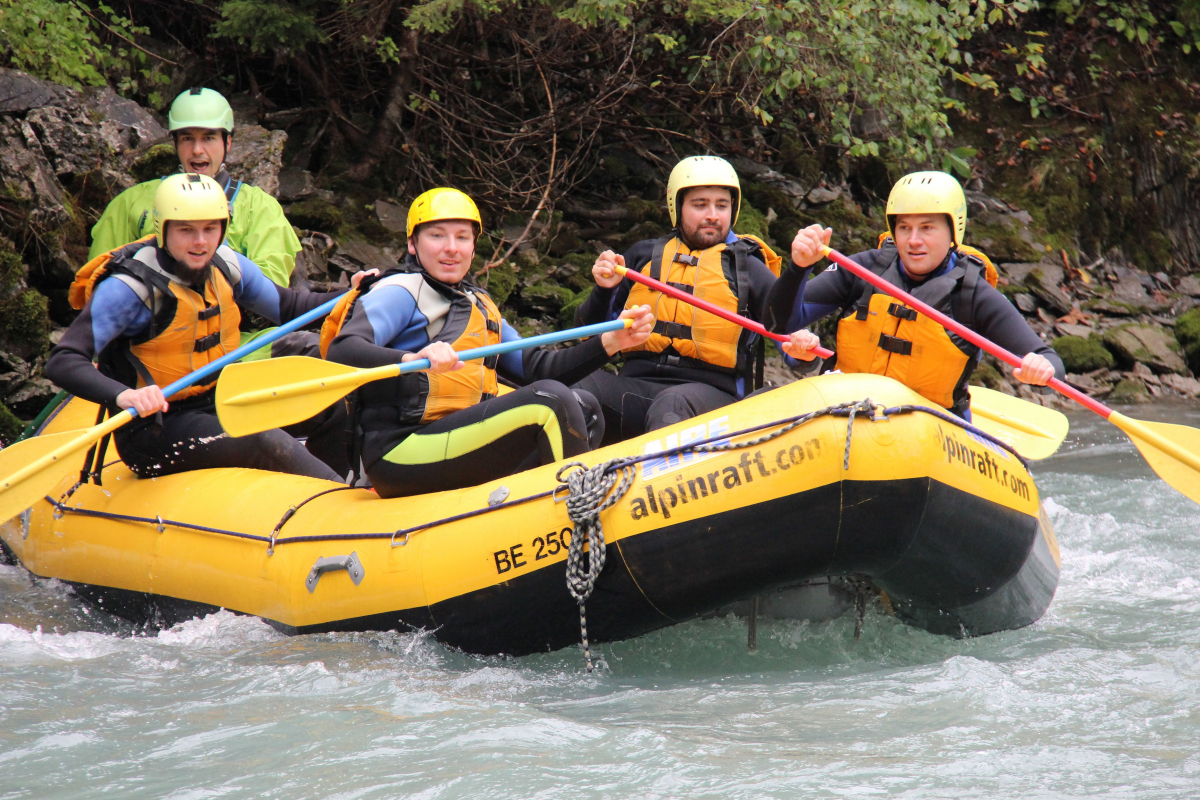 Relaxed rafting on the Simme 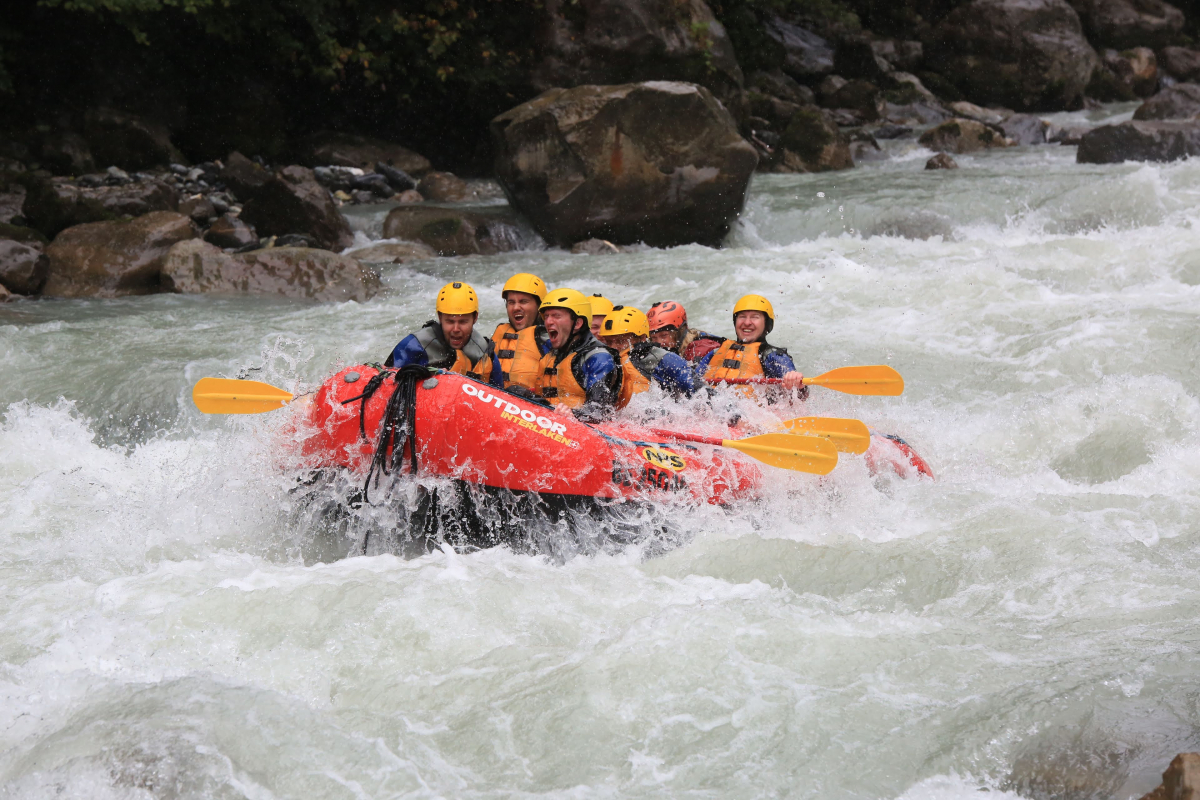 Rafting on the Lütschine (not so relaxed)

Two hours later, everybody was dry and having the last lunch of the team event in a cheerful mood. “Because our colleagues work in so many different places, you quite often go for quite a long time without seeing particular people. Events like this keep the team spirit up and give you an opportunity to exchange ideas, make new friends and renew old acquaintances. This is particularly good for me as a new employee,” is how Michael Wolski summarised the three days. Yasin Özdemir liked that “everybody had an opportunity to interact at a personal level rather than a professional level. The activities are always unique. You would be unlikely to do something with this on your own; that makes the events and the conversations you have memorable.” 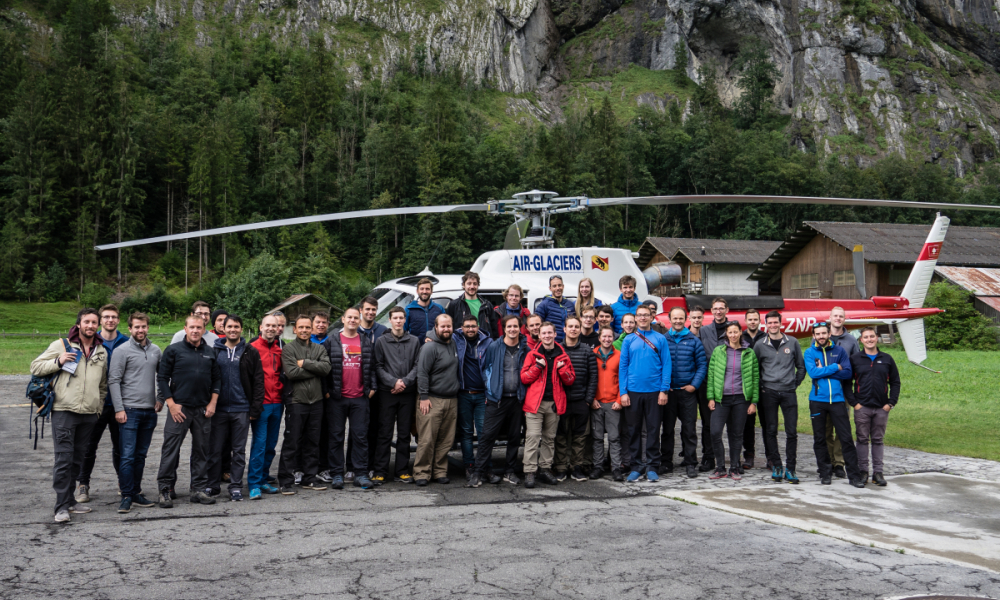